Language skills: Turning – falling in and falling out

Language skills: Turning - falling in and falling out

You have brains in your head. You have feet in your shoes. You can steer yourself any direction you choose. Dr. Seuss

Beautiful turns – are they important?
As with other communication between the horse and rider, turning can be done with a basic method, or with finesse. So you can say ‘turn left’ or ‘turn right’; or you can say ‘turn right while stepping under with your inside hind limb (to help balance), don’t swing your quarters out, flex to the degree of the circle/corner, staying in a soft contact and outline while keeping the same tempo (speed).

WOW, can my horse really do all that? A horse cantering by itself in the paddock can make beautifully balanced turns long before it is backed. So, when a rider gets on it only needs to learn two main things – the first is how to balance the rider’s weight as well as their own; and the second is to associate the rider’s signals with what the rider is asking for. Of course, this is never as easy as it sounds, but it depends on how well you want to communicate with your horse as to how much effort you put into developing you and your horse’s language skills.

So, how do I do a basic turn?
If you are leading a horse from the ground, then the obvious way to turn it is to move the lead rope to one side, and a trained horse will follow. The horse turns towards the pressure, it receives a reward because the rope pressure stops, and the person is happy because the horse is going where it was asked to go. This is also a common method used by many riders when mounted i.e. they pull on one rein and the horse turns toward the pressure and gets its reward because the pressure goes away (so long as the rider doesn’t keep hanging onto the rein!!), and the horse is going where it is asked to go, so the rider is happy.

The main problem with this method of communication only comes if the rider wants to do a better turn e.g. to balance a horse before a jump, or for a dressage test, or just because they like riding a well-balanced horse. Whether or not the person is on the ground or on the horse, this way of saying TURN only controls the head, with the body following because the horse is obliging and obedient. However, there is no control over how the body follows, and the horse may bulge its shoulder in or out, swing its hindquarters in or out, throw its head too high or too low, and slow down or increase the pace as it turns. To avoid these, we need to help the horse balance, so that it can perform a smooth turn easily.

What do I do to stop my horse ‘falling in’ or ‘falling out’ at the shoulder?
Sometimes when circling, it feels as if the horse’s shoulder is either bulging in towards the centre of the circle (falling in) or outwards towards the fence or open field (falling out). Normally, the horse will fall out on one rein and fall in on the other because (just like us) the different sides of the body are not equally good at doing things; therefore, we usually need to ride differently depending on which ‘rein’ we are on. Although it is too big a subject to cover every aspect of this in one go, the following will help to control the shoulders.

Falling in: the horse’s shoulders head toward the inside of the circle, followed by the rest of the body so the circle tends to get smaller and smaller. The usual reaction of the rider is to pull the horse back out again using the outside rein, but this leads to the horse being crooked. The tendency of the horse is still to fall inwards (see black arrow in the diagram below), and the horse will be bent outwards instead of following the curve of the circle, although it will do a larger circle. You can often see this method of getting around a corner in the showjumping ring, where the horse is held out then suddenly allowed to swing back in time to see the fence.

To keep the horse’s body on the line of the curve, in order to do a nicely balanced turn, we need to ‘push it out’ instead of ‘pulling it out’ and we do this with the inside leg aid. Note that the horse needs to learn to move away from the leg first, just as if you were teaching it to move over in the stable by pushing it near the girth area.

The outside rein must still have a light contact (to let the horse know that you don’t want it to go faster) but the hand moves forward slightly to allow the horse to bend around the curve. On a young/untrained horse, the inside hand can also open out (away from the horse’s shoulder toward the centre of the circle) to help guide the horse around the curve, but it mustn’t pull backward as it does so, because this will slow the horse down.

Once the horse and rider have learnt how to do this, it is good fun to start on a small circle and make it larger by using the inside leg only! This also helps the horse to learn lateral movements later, and is a good check to see if you are using too much outside rein when you are doing a corner or circle.

Falling out: As mentioned above, the horse will often have the opposite reaction on the other rein (although some horses will fall out on both reins, or fall in on both reins, depending on how stiff they are). The rider’s usual reaction is to pull harder with the inside rein, to try to keep the horse on the circle, but this often makes the situation worse. The horse’s weight goes even further toward its outside shoulder, the shoulder bulges more, and again the horse will be crooked because it can’t keep its balance.

So, to keep the horse’s body on the line of the curve, we need to use our outside leg to help push inwards, but this won’t be enough on its own. It is harder for a horse to move towards the ‘inside’, or ‘closed’, side of its bent body compared to moving towards the ‘outside’, or ‘open’ side of its bent body. Therefore, we also need some support from the outside rein, which together with the outside leg help to ‘push’ the horse around on the circle, rather than pulling it.

Imagine a tug boat pulling a larger ship – if it just attached a rope near the front and pulled, then the front would swing toward the pull but the rest of the ship would swing outwards. However, if the tug boat went around to the other side and pushed part way along the ship, then it could shift the whole ship over. (Okay, I know that a ship doesn’t bend like a horse, but it is the principle of it i.e. you can’t shift a whole untrained horse toward the centre of the circle just by pulling on the inside rein).

So, do I just pull on the outside rein then?
Just pulling on the outside rein will block the forward movement, and the horse will slow down rather than turn. It can be useful to slow a young horse down for turns to help it balance initially, but the ‘slowing down’ aid and the ‘moving over’ aid need to be a little different so that the horse can learn that something else is required.

Instead of pulling backwards on the outside rein, the hand moves slightly toward the horse’s neck instead! This is not a backward pull; instead it is moving the position of the hand while keeping the same amount of contact on the bit. The rein ends up against the horse’s neck, which also helps the horse to get the idea of turning. Do NOT cross the hand over the withers, as this changes the feel of the bit in the horse’s mouth. 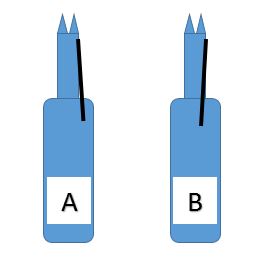 Horses have very sensitive mouths, and although it doesn’t seem like the hand is moving much, they can tell the difference. Note that you need to practice keeping your hands still before you can do this, otherwise the horse will not know when you are giving a signal or not i.e. you must be ‘quiet’ between asking the horse for different things, because if your hands and legs are always niggling or babbling away at the horse then it will switch off and not ‘hear’ anything you ask it.

As with making the circle bigger using the inside leg, you can also practice making the circle smaller by using just your outside rein and leg aid, but this is harder for the horse than moving the horse outwards using your inside leg (as mentioned above), so don’t be surprised if it takes more practice. Once established, the horse should be able to spiral smoothly in and out between different size circles, just from the use of the appropriate aids. This is a very useful exercise for jumping, as it can help you can adjust the horse if you turn on the wrong line towards a fence, and also helps prepare the horse and rider for lateral work needed in dressage.

Lastly, remember to correct what the horse is offering; don’t just do the same in both directions if the horse has different faults on each rein. Also remember to reward the horse as soon as it makes an effort to do the right thing. It is easy for a horse to adjust its own balance whenever it wants, but it is very hard for it to learn that a certain signal by its rider means that it needs to change its balance in a certain way!