VISION – Can my horse see in the dark and what colours can it see?

"...everything in nature is coloured" – Paul Cezanne

Quick Notes:
Horses have similar eye anatomy to humans but there are also some key differences. They are much better at seeing and detecting shapes and movement in poor light conditions than humans. Although they can see colour, and can identify the full range of colours that we can, it is unlikely that they see them all in exactly the same that we do. Variations also occur in individual horses, as some can identify colours that others cannot.

More Detail:
Both human and horse eyes contain sensory cells that detect light, movement, and colour. The cells that detect light and movement are called ‘rods’. The horse is much better than a human at detecting movement in low light conditions; for example, they can see shapes when there is a moonless night, and can manage in familiar environments in very dark conditions. Being able to see in the dark is known as ‘scotopic’ vision, but this vision only occurs in black and white i.e. the horse doesn’t see colour in poor light conditions.

Horses are excellent at detecting movement in poor light conditions, and can notice body movements of mere millimetres in daylight. The trick horse ‘Clever Hans’ appeared to count and do sums (by pawing with one leg) without any indication from the owner, who genuinely believed his horse could do basic maths as Clever Hans performed even when he was not present. However, it was shown that Clever Hans was carefully watching the body language of whoever was giving the numbers, and noticed the very slight movement that a person made when he had pawed for the correct number of times. Clever Hans reacted to the human’s movement by stopping pawing (expecting a reward) and therefore looked as if he was counting all by himself. It is this sort of ability that can cause confusion when training a horse, as we can be totally unaware of some body movement that the horse regards as a significant signal. 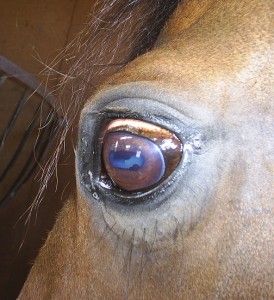 Image: A horses eye, showing the blue ‘tapetum lucidum’ reflecting light in the back of the eye (triggered by the camera flash). The dark tissue projecting across the pupil area (showing against the blue) are the corpora nigra (iridial granules) which help reduce glare in bright conditions. Figure taken from Equine Behaviour Explained, by Wendy Gill (see the eBooks page).

You may have noticed that many animals have a distinctive colour to their eyes when they are seen with torchlight or in the car headlights. In horses, this is usually bluish and is due to a reflective layer at the back of the eye called the ‘tapetum lucidum’. It acts to spread the available light to more sensory cells, increasing the ability to see when there is low light. This is not the same as ‘red-eye’ which appears in human photos, as humans don’t have a tapetum lucidum which is one of the reasons why they cannot see as well in the dark as horses.

So, what about colour vision then?
Last century it was believed that animals couldn’t see colour at all, but we now know this is not true. The cells in the eye that detect colour are called ‘cones’. Most animals, including horses, have two types of cones and are known as ‘dichromatic’ (two colours). Each cone detects light wavelengths in a different range, so detects different ‘colours’ in the spectrum. Humans have three cone types and are ‘trichromatic’ (three colours), though some humans are colour-blind and may have only two, one, or no cone types. The three human cone types detect colours that are approximately equivalent to red, blue, and yellow, with other colours being a mix of these (detected by triggering different numbers of cones of each type).

Animals with only two cones are better at detecting predators when light conditions are poor so, from an evolutionary point of view, it is better for a horse to have two cone types than three.

It is often claimed that a horse will see colours the same as a colour-blind human that has only two cones (i.e. they can see most colours but often mistake colours such as green or orange). However the horse has one cone that detects a similar wavelength to a human cone, and a second cone that detects wavelengths partway between the humans other two cones. This means that it is unlikely that all of the colours are seen exactly the same as a dichromatic human.

What research is available for horses?
A lot of research trials have come up with conflicting results as to which colours a horse can detect. It has since been found that colours are detected differently depending on many factors, including what shade or pattern is used; where the colour is positioned (seen better at ground level than at eye level); whether the colour is painted, printed, or made by a light beam (which all have different light effects); and more. It has also been shown that some individual horses can detect colour better than others (which is also been found in other animal experiments e.g. some cats can detect more colours than other cats), and this is also related to many things including age (i.e. old horses may have poorer colour vision).

So, how do we know what colours a horse can see?
We don’t. Horses have been shown to distinguish a full range of colours, e.g. they can tell a red jump from a blue or yellow or green jump etc.; however, they are unlikely to see all of the colours exactly the same as a human. Although we can generate computer images of what we think they might be able to see (based on the wavelengths that their cones detect) we cannot tell how they really see each colour and we don’t know how their brains process the ‘colour’ information that reaches the brain.

We also cannot tell how an individual horse sees a colour, though we do know that horses can develop preferences or dislikes of different colours e.g. a horse that is consistently fed from a certain coloured bucket will learn to associate that colour with food, while a horse that has a bad experience with a jump of a certain colour can dislike jumping jumps of a similar colour (though this can also depend on the type of jump, reflective paint, circumstances etc.).

In the future, it may be possible to scan the horse’s brain while they are looking at things and ‘see’ exactly what they are seeing. However, in the interim we have to go on what is the best knowledge available at the time. So, yes your horse can see colour, but we are not exactly sure how they will see each colour, and their perception can vary depending on many things including: what type of surface is coloured, how much light there is available, and even whether an individual horse has fully functioning cones. The important thing to remember is that they are likely to be able to ‘distinguish’ the different colours, even if they don’t ‘see’ them the same way we do.

Back to Top of Page
Or click the button below to return to the Article page.